There are 24 days left to Sine Die 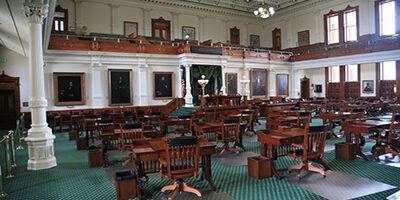 There are 24 days left to Sine Die, and this past week has left us in a breathless whirlwind! Eye-catching headlines include the passage of the Firearm Carry Act, the Texas Heartbeat Bill, and the Omnibus Elections Bill. Additionally, the conference committee on the budget is almost done with its work. Hold onto your hats – it’s a mad dash to the end!

Representatives stayed at the capitol for a long night Thursday when SB 7, the omnibus elections bill, was laid out for consideration. Around 3 a.m., the bill passed with initial approval to third reading by an 81-64 vote. Eighteen floor amendments were adopted in the nine hours of debate, some of which ease initial new penalties, state that police may be called to remove disrupting partisan poll watchers, and seek to expand ballot access. Other changes in the House removed restrictions, like those banning drive-through voting, banning 24-hour voting, and adding limitations on voting machine allocation. On the other hand, the bill bans election officials from proactively mailing out absentee ballot applications or absentee ballots, empowers poll watchers, and enacts stringent rules for assisting voters. Any amendment can later be stricken by a potential conference committee. Florida, Georgia, and Iowa have passed similar measures. The legislation is an emergency action item of Governor Abbott and of Lieutenant Governor Dan Patrick for the session. The bill returns to the Senate as amended for approval before going to the Governor for his final signature.

On Wednesday, the Senate passed HB 1927, the Firearm Carry Act, after being voted out of the Senate Special Committee on Constitutional Issues on a 5-2 vote along party lines. Seven hours of discussion on the floor preceded the vote, eight amendments were adopted on the floor, and the bill passed 18-13 along party lines.  Lieutenant Governor Dan Patrick remarked that when the legislation first came over from the House, the bill still did not have quite enough votes, but that he was “optimistic and working to be sure [they] get those votes to be able to pass it out” at that time. Following the passage of the bill Wednesday he said, “I am proud that the Texas Senate passed House Bill 1927 today, the Constitutional Carry bill, which affirms every Texan’s right to self-defense and our state’s strong support for our Second Amendment right to bear arms. In the Lone Star State, the Constitution is our permit to carry. I congratulate Senator Charles Schwertner for his leadership on this important issue and for the thoughtful and respectful debate in the Texas Senate today. We have moved quickly on this legislation and I want to thank all those involved who helped gather the votes needed to pass this historic bill.”

According to Census Bureau estimates released Tuesday, Texas continues to lead the United States in raw population growth. Since 2010, Texas has gained the most residents numerically, resulting in a two-seat gain in the U.S. House of Representatives and bringing its total seats to 38. The data necessary for redistricting is expected from the Census Bureau in September at the earliest, and the capitol is seeing an increased public interest in the process. The Senate’s Special Committee on Redistricting has held numerous regional hearings, and the House Redistricting Committee is now performing its own. Many measures have been filed this session to ensure the integrity and transparency of the redistricting process. Last month, lawmakers on the federal level passed House Resolution 1, voting reform legislation that would require states to use independent commissions to approve newly drawn districts. The commission would include five Republicans, five Democrats, and five Independents. In our own state, we have House Bill 3112, the Texas Redistricting Transparency Act.

This week, Comptroller Glenn Hegar revised Texas’ revenue estimate and now projects a fiscal 2021 ending balance of $1.67 billion more than the estimate five months ago. The updated Biennial Revenue Estimate (BRE) accounts for $113.88 billion available for general-purpose spending. The BRE also projects the ending balance in General Revenue-Related (GR-R) funds to be $725 million. Estimates for the 2022-2023 biennium anticipate $115.65 billion for general-purpose spending, which is an increase of $3.12 billion from the January BRE. Comptroller Hegar attributes the revisions to updates from the Legislative Budget Board of the state obligation for Foundation School Program funding and also to revised estimates of oil and natural gas production tax collections. Comptroller Hegar articulated, “When we finalized our economic forecast for the January BRE, COVID case counts and hospitalizations were on the rise, and the rollout of vaccines had just begun. Those conditions warranted caution about the near-term economic outlook. Since then, case counts and hospitalizations have plummeted, many restrictions have been lifted and economic activity in the state – and across the country – has accelerated.” The update comes amid an economic resurgence in Texas. According to data from the Texas Workforce Commission, Texas added nearly 100,000 new jobs in March alone. Since a peak in Covid-19 related job losses, Texas had added back almost 1 million jobs. With combined efforts from Governor Abbott, lawmakers across the state, and all Texans, we’re on track for a major economic comeback.

Through Monday, 43 bills had been approved by both chambers out of almost 7,000 filed. Worry not – each chamber focuses on passing its own bills before considering legislation passed over from the other side of the capitol. Keep in mind the following dates. By 10 p.m. on May 11, the last House daily calendar with House bills and House Joint Resolutions must be distributed. May 13 is the 122nd day of the session and marks the last day for the House to take initial votes on measures that originated in that chamber. May 14 is the deadline for consideration of bills on the Consent calendar and the final day for the House to take second and final votes on House-originating legislation. May 21 is the last day for the House to consider bills on the Local and Consent calendar for second and final votes. May 26 is the final day the Senate can consider any bills.

There are just 24 days left in the session. At this point, a bill could be voted out of committee as late as today, Friday, May 7, and still be reported to the Calendars Committee in time to be scheduled for a vote on the general calendar. This website provides another overview of important dates and deadlines this session.